Simple ingredients can transform you, to a great “chef”.

But as most people’s time, my time is precious and also so short. So, I need to prepare good food for my family but the clock ticking!

The simplicity of paleo recipes, many times is the solution. Because we want quality food. So we trust the old fashion cooking way!

One of those goldies is stuffed peppers with rice in the oven. And this is what I want to share with you today.

Pepper seeds were carried to Spain in 1493 and from there spread to other European, African, and Asian countries. Today, China is the world’s largest pepper producer, followed by Mexico and Indonesia.

Capsicum peppers are rich sources of antioxidants and vitamin C. The level of carotene, like lycopene, is nine times higher in red peppers. Red peppers have twice the vitamin C content of green peppers.

One of the world’s healthiest food.

We rinse with water and cut the upper part of each pepper as lead while removing the stalk and the sheeds.

After that we put them in the baking pan.

For every pepper we count 1,5 tbs rice. Fresh smashed tomatoes and onions are basics for the stuffing.

But the special aroma is from dry mint.

We stir until most of the water is absorbed.

Many people don’t match rice with potatoes, but I do.

This is a healthy, vegan and easy food.

If you want to try it, you will need these:

HOW TO MAKE IT

We rinse with water and cut the upper part of each pepper as lead while removing the stalk and the sheeds.

After that we put them in the baking pan.

In a pan we put the olive oil, the onion and smashed tomatoes with salt, pepper and all the herbs. We stir for 2′ and we add the rice. We continue to stir and we add one cup warm water.

After 10′,  when the most of the water will be absorbed, the stuffing is ready.

We fill the peppers. We cut potatoes into pieces and put them in the baking pan with peppers.  We add salt and rosemary over the potatoes. 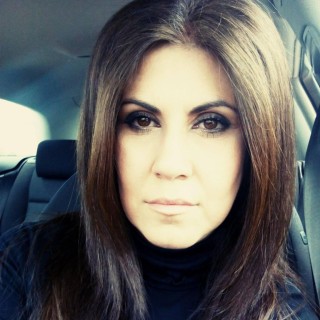 My name is Lia and I always had the need to create things from scratch. Handmade items have the magic of uniqueness that makes them special. This year 2018 I decided to be a part of this creative community. Work, passion and lot of love are my secret materials. So, lets walk together this colorful path...